You are viewing this site in staging mode. Click in this bar to return to normal site.

All Saints is fortunate to have a fine collection of Victorian and Edwardian stained glass, Alan Younger’s outstanding example of modern work, and the most recent - the "Millennium Window" by Jude Tarrant on the west wall.

The east window, showing Our Lord in Glory, is in memory of George Thomas Garnett who died in 1886. It was made by Mayer & Co of Munich & London. In 1912 – many years before either of them died – the Reverend FC Green’s children presented the window in the Sanctuary to their parents memory, depicting The Charge to St Peter.

The other window in the Chancel, showing the Blessing of the Children, was erected by public subscription in memory of Thomas Taylor, Denmead’s Schoolmaster for 36 years, and first Secretary of the Church. Both these windows were made by the renowned Clayton & Bell factory.
Chancel Window

The Assistant Keeper of the William Morris Gallery, Peter Cormack, who has a considerable knowledge of 19th century and Arts & Crafts stained glass has offered the opinion that all the Clayton & Bell windows in All Saints would have been drawn by George Daniels.

In the south wall the window closest to the Screen, depicting Joseph and Mary, commemorates John Wilkinson, a farmer of Pear Tree Cottage, Hambledon Road, and an early Church Warden who died in 1911.

Opposite the main door, in a restored window opening, which used to be the door to the 1959 Vestry, is a memorial window to William Griffin Snr, the farmer who gave the land on which All Saints’ stands. He was 78 years old when the original church was built, and died in 1883. This window, which is possibly also by Mayer of Munich, shows the Walk to Emmaus and The Ascension, and has been moved from its original position in the north east corner of the original Nave.

The Clayton & Bell windows depicting Zacharias and Elizabeth, above the Font in the West wall, commemorate Gertrude Arbuthnot who died in 1918; she was the daughter of the Reverend FC Green. In preparation for installation of the organ, they were moved in 1998, from their original position in the centre of the South wall, as a memorial to the parents of two parishioners.

The window closest to the door is the village war memorial. It was resolved in April 1917 that a window be erected at the end of the First World War “to the memory of those who have fallen”. This Clayton & Bell window representing Christ’s Resurrection, was restored in 1997 and moved from its original position in the centre of the north wall to its present position in the south wall. Either side of the window are the memorial brasses to the dead of two World Wars. George Cleeve’s name was added to the World War I plate in 1995 by his descendants. His family could not at first accept that he was dead, and would not permit his name to be included on the original monument.
It is normal to find village war memorials where four times as many lives were lost in World War I as in World War II. Hambledon’s numbers are 33 and 8. It is interesting to note that in Denmead there are 23 names on the First World War plate and 26 names on the Second. This shows that Denmead’s population grew between 1918 and 1939 by a factor of four – a contributory reason for the need to extend the Church in 1996.

The theme of the whole design is the Trinity. The small top window represents God the Father, with the central circle illustrating eternity. The right-hand window depicts God the Son, and shows Christ on the Cross, with six stars representing six of the twelve apostles. The left-hand window represents God the Holy Spirit, and shows a descending dove and the other six stars for the other six Apostles. 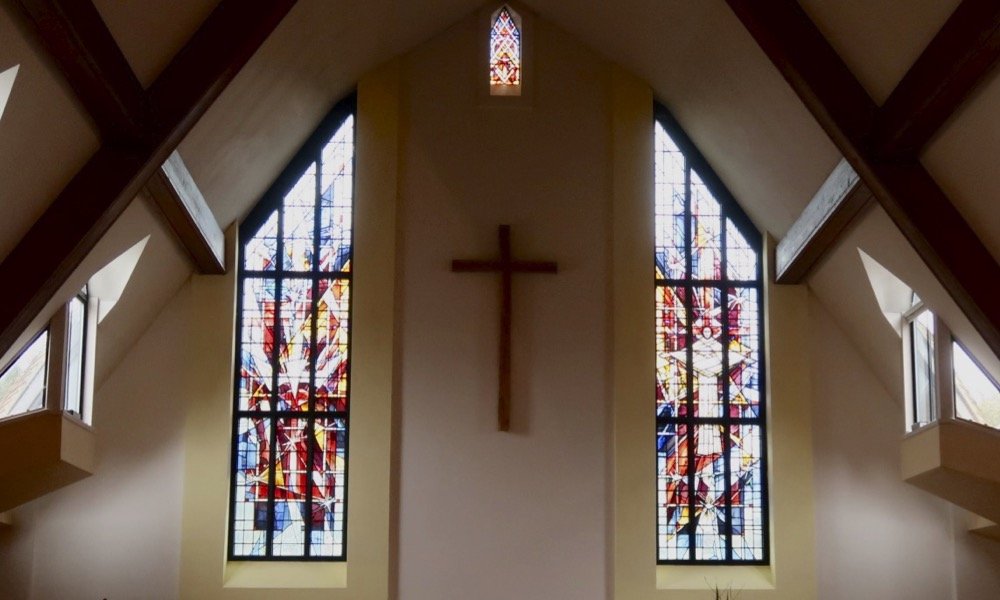 A fuller description of the artist’s thoughts about the design of these windows can be found at the back of the Church.

Above the font on the west wall, the outer windows depict Zacharias and Elizabeth. Between these is a modern window by Jude Tarrant called "The Earth is the Lord's" which was added in 2013 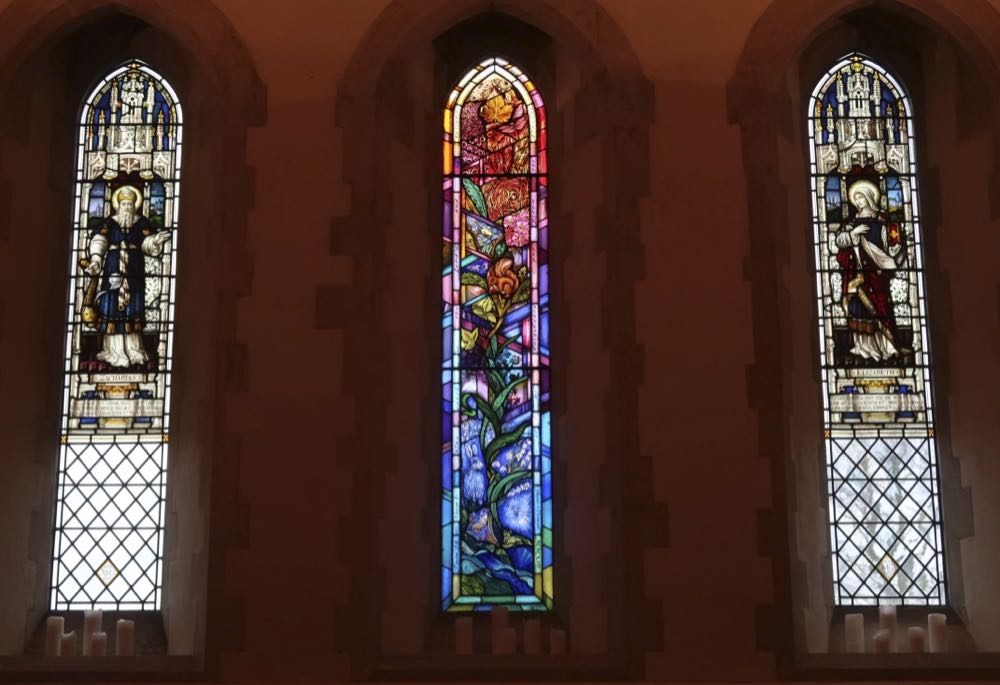